Imaging of B-lines: the best probe has to be determined, use same probe when you want to compare images in a patient over time; depth 6-9 cm for linear probe and 15 cm for cardiac or abdominal probe, use lung preset or turn of filters, e.g. tissue harmonics or spatial compounding (SonoCT), put focus zone on pleural line, turn up the far gain.

Pleural thickening: Can mimic a loculated effusion. However, the fluid color sign is negative in pleural thickening. When color Doppler is used, the sensitivity of the Doppler should be set to low flow or the low-velocity scale (typically 0.25 m/sec). The wall filter is set to minimize rejection of small frequency shifts and to avoid interference from respiratory or cardiac movements (2). The color Doppler gain is increased until a uniform background colored “snowstorm” is obtained and then decreased until just a few random colored speckles remain. (Reuss J. The Pleura. Chest Sonography) In addition, the sinusoid sign is negative. (Foto)

Lung ultrasound can be routinely be performed at the bedside and may provide important information on lung status with diagnostic and therapeutic relevance.

Linear, cardiac and even abdominal probes can be used. B- and M-modes are used when appropriate. Most importantly, considering the fact that LUS relies on artifacts, it is necessary to suppress all software artifact reduction, such as filters and harmonics.

Evaluation of the lungs requires a systematic approach of examination. For this, scanning of the thorax can be done by several protocols:

One approach is to scan at least three different zones per lung, according to the BLUE protocol: anterior, anteromedial and posterior (ref).

Another approach is in lung ultrasound aeration score, which uses a 12-site scanning protocol (Figure..)

The patient can be examined in the supine position. For examination of the dorsal regions of the lower lobes, the lateral decubitus position is preferred.

LUS is based on artifacts which are generated when gas and fluids are mingled in the thorax. There are many LUS artifacts, but for daily practice only a few need to be remembered. These will be discussed here. For more extensive description we suggest the following references.(refs[PRT1] in progress) Images are shown in the text. Larger and other images are shown below the text.

Bat sign: the pleural line is seen as a horizontal and hyperechoic line, situated slightly beneath two ribs, around 0.5 cm. The bat sign is a permanent landmark and visible in all circumstances, e.g. agitated or obese patients, and indicates the pleural line. (Figure 1) 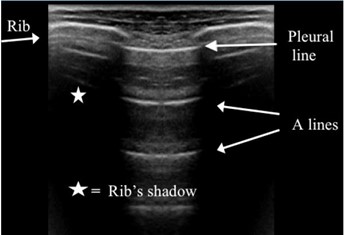 Lung-sliding: a relative movement of the visceral to the  parietal pleural line, seen as a subtle sparkling artifact. Lung-sliding can be physiologically more discrete at the upper parts of the lung and be very discrete in pathological conditions. (ref Lichtenstein Ann Intensive Care 2014) (clip) 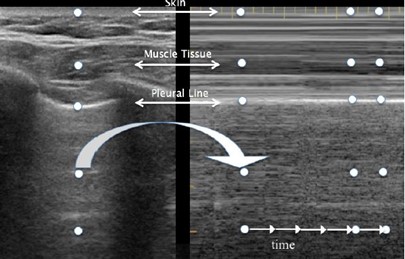 Barcode or stratosphere sign: M-mode shows a stratified pattern above and below the pleural line. (Figure 4) 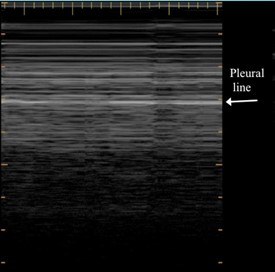 Lung point: a precise area of the thorax where abolished lung sliding and sudden appearance of lung sliding on inspiration are visualized in M-mode, giving a barcode-like image. (clip)

A-line:  horizontal, hyperechoic repetition(s) of the pleural line, arising at regular intervals; They indicate gas, which can be physiological or free.(Figure 1)

B-line: a well-defined, laser-like, hyperechoic, artifact, which arises from the pleural line, moves in concert with lung-sliding, erases A-lines and reaches the edge of the screen.(Figure 2) 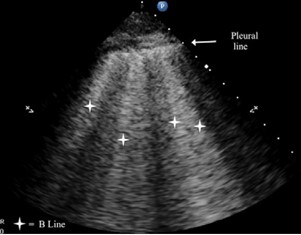 Pleural effusion: an anechoic or echoic image, limited by borders of both the pleural lines, located in the dependent regions. (Figure 5)

Tissue-like sign: an echoic, tissue-like pattern, reminiscent of the spleen or liver. This indicates consolidation of the lung. Small gas collections can be present.(Figure 5)

Shred sign: a curvilinear aspect of the pleural line, which gives a shredded appearance. The border between consolidated and aerated lung is irregular, as opposed to the lung line,  and is associated with nontranslobar consolidation (ref Lichtenstein Ann Int Care 2014) (Figure 5)

Lung pulse: A dynamic lung ultrasound sign described as the association of absent lung sliding with the perception of heart activity at the pleural line. It is a sign of complete atelectasis which is observable immediately before radiological changes. (foto)

Pleural thickening: hypoechoic lesions of more than 2 mm separating the parietal from the visceral pleura. Pleural calcifications appears as a hyperechoic structure. (Foto)

Pleural effusion: appears as an hypoechoic structure in the dependent lung regions delineated by the chest wall, diaphragm and pleural line.(Figure 5) The nature of the effusion can also be assessed by lung ultrasound. Transudates are always anechoic, whereas exsudates appear often to be echoic and loculated. Septation is a sign of inflammatory effusions (ref Yang Luh Chang Am J Roentgenol 1992; 159:29-33)

Quad sign: The deep bounderay of the pleural effusion is regular, roughly parallel to the pleural line and called the lung line. This draws the quad sign. (Foto)

Sinusoid sign: During inspiration the lung-line moves toward the pleural line. This generates the sinusoid sign when using the M-mode and indicates pleural effusion. (foto)

Abscess: peripheral lung abscesses included in a consolidation or with pleural contact appear as a rounded hypoechoic lesion with outer margins. (foto)

FALLS-protocol: For hemodynamic assessment of circulatory failure using lung ultrasound, the Fluid Administration Limited by lung Sonography (FALLS) protocol was designed. This approach is based on the fact that A-profile is associated with a low pulmonary artery occlusion pressure. (ref)

Lung ultrasound is used to diagnose the cause of respiratory failure (e.g. by using the BLUE-protocol) and assess the lung as a direct parameter of clinical volemia: the apparition of signs of interstitial syndrome (B-lines) is considered as the endpoint for fluid therapy (FALLS protocol).

Monitoring: The lung ultrasound score can be used for monitoring of disease progression and for assesment of therapies, such as recruitment/proning (Figure 6).

Guiding therapeutic interventions: thoracentesis can be guided by bedside lung ultrasound, enabling this into a safe procedure.

The BLUE-protocol is a fast protocol which can be done within 3 minutes, whereas lung injury score can take up to 15 minutes. 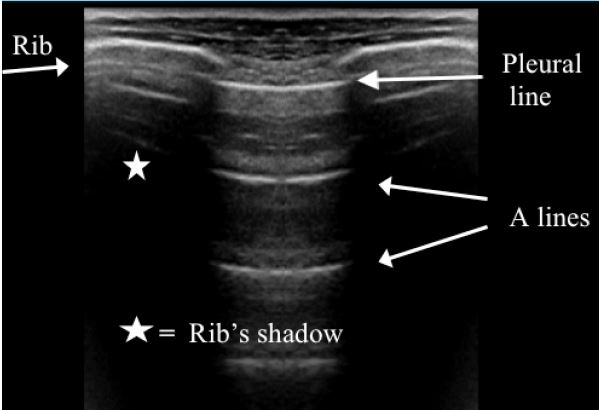 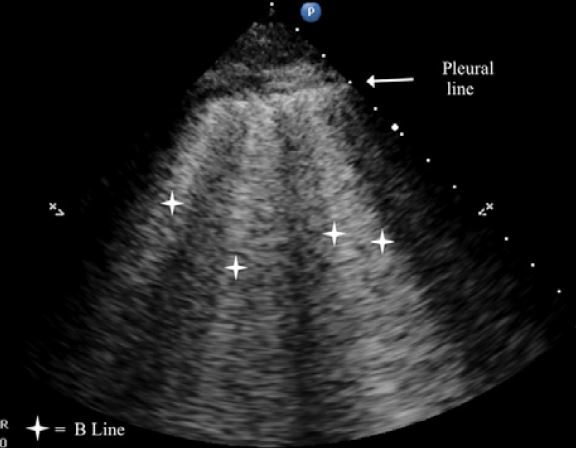 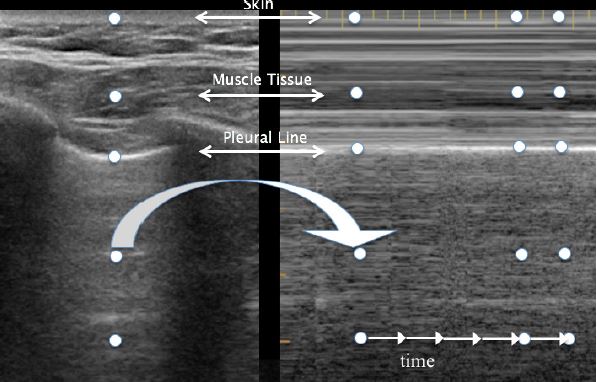 Figure 3. B-mode with A-lines and M-mode with seashore sign 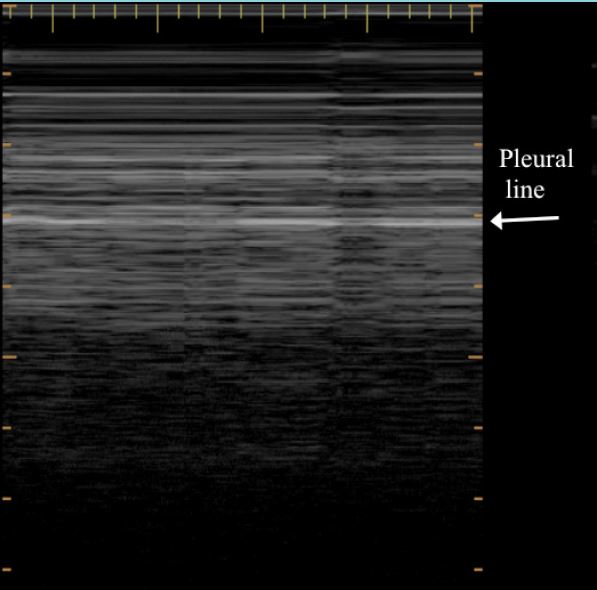 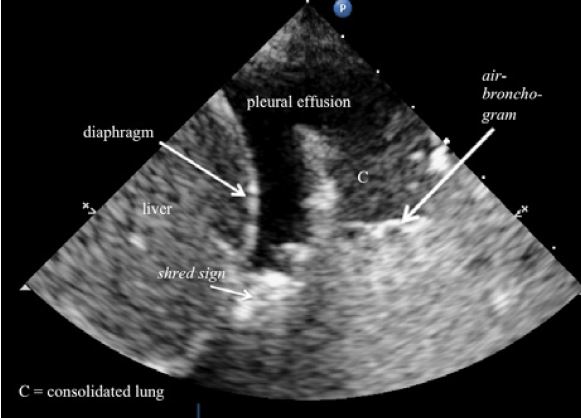 Figure 5. A pleural effusion and consolidated lung tissue at the 'PLAPS'point 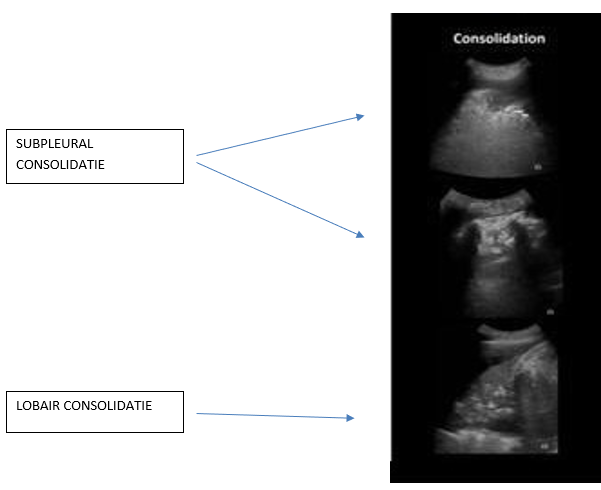 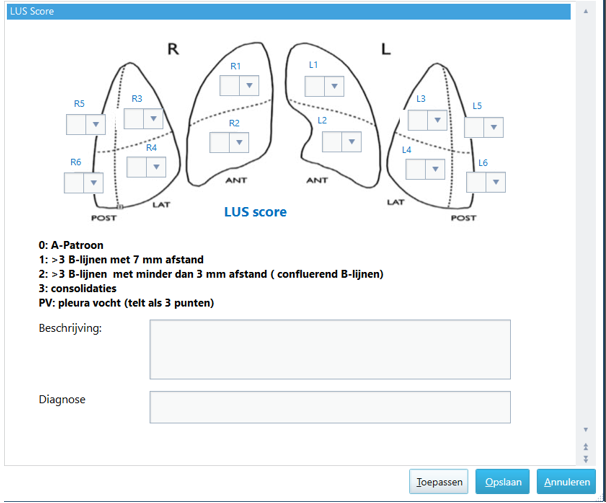 Figure 6. Example of a scoring form for the lung ultrasound score in the electronic patient management system (in Dutch)